The first link here is concerning the 24 Letter Original Ancient Hebrew Text is used and referenced in Transcribed English in these recordings.

Most people that study read the KJV which  is from the government authorized version, which the public was allowed to have. The KJV Old Testament is based on the Khazaian/Edomite Masoretic Modern Aramcaic/Hebrew text. The KJV in both Testaments had been heavily tampered with by several secret societies, including the Masons. The true Original 24 Letter Ancient Hebrew tells us in Isaiah/ YaSha'YaHuW 9:6 - 7 as follows:
6  Because the-Child has-been-begotten to-us, the-Son has-been-given to-us, of-Whom the dominion has-come-to-be uponHis shoulder. And His name has-been-called ‘the-Angel of-the Great Plan*’. For He-shall-bring SHaLauWM upon the-rulers, and His health.

Here's a link to study the original ancient 24 letter Hebrew text. Start at the 54:54 minute mark on the call and you will hear the live study of Isaiah Chapters 8 & 9.
Click Here: 24 Letters Original Ancient Hebrew
https://tinyurl.com/t2mc82j

The Feast of-the Harvest of Firstfruits aka Centicost; there is no Penticost except to the followers of Paul rather than YaHuWSHuWaH, and the followers of those Judaizing. Pentecost is not in the Septuagint Greek as Pentecost, nor the Masoretic Aramaic/Hebrew. Also only in the Pauline material does it ever occur; but never in any of the other BaRiYTH CHaDaSHaH (New Testament) writings.

9 Exo 17:8, 23:16; Lev 23:15 - 21
* - The Greek άρχή is the future middle indicative second person singular of the G756 αρχω meaning in the middle sense ‘to continue,’ or in time ‘to continue from a certain point in time.’
So the day after the Sheaf being lifted up in verse Leviticus 23:11, seven whole weeks is 49 days. Then on the morrow after the last whole week is counted, then seven more weeks shall continue to be counted. This is a future tense at this time showing action that ‘then’ needs to occur. This does not say that “‘you shall-have-counted’ fifty Days” as the verb then would have been άριθμηθήσονται the future passive indicative third person plural. So the Khazarian/Edomites and the intercalators of the Pauline books have brought us to think that this is simply a 50 day count period, it is not. Pentecost is only mentioned in the Pauline books, and by Judaizers, and never in the Septuagint Greek, or in the Masoretic Text as Pentecost G4005 (πεντηκοστή). However if one looks at the time to travel to Mount SiYNiY (Sinai) to receive the Royal THauWRaH the first time, it is 100 days, actually allowing for several RaSH CHaDaSHaHs it works out to 102 to 104 days depending on the year. In Exodus 23:16 this is called ‘The Feast of-the Harvest of-First-fruits.’ See the notes in Exodus on the provable time line for this. Pentecost is a farce.

GOD?
​The word Jesus is not the True Hebrew MaShiYaCH's (Messiahs) Name. There was no letter j in the English language until the 1524 A.D. Never has there been a letter j in the original Ancient Hebrew language. God, Gad, Gud are all interrelated names. God was a common Teutonic-Germanic word that was applied to superhuman beings of heathen mythologies.
Later the word "God" was adopted by Christianity as the generic name for the Supreme Being. It has become the most popular translation for the Hebrew word "ALuHiYM." As a result, most of Christendom believes that the Name for ALuHiYM is "God" and does not know that the personal Name of the Father is YaHuWaH. Gad was the Babylonian/Canaanite/Syrian deity of "Good Luck" or "Fortune," also called "Meni," the god of "Destiny" who was regarded as the "Lord Moon." The city of Gad was named after this deity. Gad was identified with Jupiter, the Sun-deity, and applied to Nimrod whose general character was that of a Sun-god or Sun-divinity. Gud was the Anglo-Saxon name for "good god" vs. an "evil god."
Original Hebrew Text, transcribed from the LXX:
Isaiah 65:11  But you-all are those-having forsaken Me, and those-having-forgotten my QuaDaSH mountain, and those-preparing a table to a demon*, and filling-up a- drink-offering to Fortune**.
* - The Greek 1142 meaning a bad sense a demon or evil spirit; also a god or goddess.  so in this phrase it could also be seen as " and preparing a-table to a-God"; hence then in Christianity it could also be "and those preparing a-table to god". So then to those in christianity, they are doing this to god; hence the God of Fortune.
** The Greek means fortune or chance. The Original Hebrew 4507 meaning Meni the Babylonian God of fate or fortune.

Creators calendar according to the moon.

Learn the True Name of Our Father
Click Here: About the name Yahweh:
http://about-yahweh.tripod.com/

6th Commandment Thou shalt not mongrelize. Mix seed lines causing nations of people (a population or group of people) to become racially or ethnically mixed. We were taught that the 7th commandment said, "Thou shalt not commit adultery." Khazairan/ Edomite KJV version that they authorized the public to read; is a misdirect and out of order commandment. Their ultimate goal is to destroy the AdaMKind man seed line by mixing serpent seed through mongralization.
http://accessstlouis.blogspot.com/2010/04/sixth-law-of-god-from-christian.html?m=1

They promote sexual sinne  through their media and schools, knowing that women store DNA from every man they've ever had Illicit sexual intercourse with.
http://woked.co/women-dna-man-made-love/

What about the KJV?

True Original Scriptures. Many of which have been made up by the false scribes for

their agenda in their KJV version and all other versions to control the masses.

Then the cycle starts all over with the RaSH CHaDaSH.

So there are different kinds of days and they are not to be just considered as just any old day, as many do in error; as follows:

RaSH CHaDaSH = a special kind of day that is specific and only happens once a month to start the moonth. This day is to be in many ways treated as SHaBath.

The Work Day = it is a day for doing our work of any kind, of which we get six in a week.

The Shabbath = a different kind of day for the first two kinds of days.

The Extended Sabbath / The Extended RaSH CHaDasH Evening = is always the fourth Shabbath, and can be a different kind of day as well. 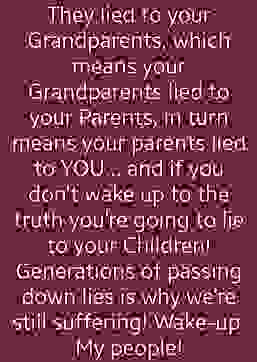 This is the Sixth Commandment in the Greek Septuagint, but in the anti-christ  Canaanite -corrupted, Hebrew, Masoretic Text it is the Seventh Commandment.

DO NOT MONGRELIZE.    6th law of YaHuWaH

About the only thing I can say about this is:
1) All of ADaMkind before the fall were predestined to be a part of the Father's household. For that is what they were created for in the first place.
2) The CHaiYTH were predestined to be born in time and to die in time, as they did not have the fullness of the RuWaCH as ADaMkind. Just as any other of the animals, creeping things, birds, etc.
3) After the Fall only righteous and in-Covenant ADaMkind would be destined to be a part of the Fathers' household. The rest were predestined to be as #4 and #5. But there was, and is, a choice; so by that ADaMkind is not predestined until the choice is made.
4)  Unrighteous ADaMkind, was then predestined to be as Ha'SaTeN and his minions, since evil ultimately only has one, and a final predestined destination.
5) All evil at the beginning of the Creation in Gen 1:2 was predestined to never ever be in the Father's household. This would be Ha'SaTeN and all his fallen angel minion, QuaYNites, and fallen ADaMkind, and all of the Nephilim in cahoots and acting as his minions. However, even though choice was not an option for the angelic beings, when they took a choice or made a choice, that was not alloted to them as ADaMkind. They did not have the choice alloted to them, since they had already perceived the Father and the heavenlies: it was that un-alloted choice that put them on the predestined path that ultimately only has one, and a final predestined destination. They had the ability for choice, yes, but it was not an option.

Why is it that all modern Churchianity and believers are looking for their Hebrew roots?
It is because they have been duped by Esau/Edom/Khazarians with the Modern-Aramaic/Hebrew; which is not True Ancient Hebrew; in order to keep and usurp Religious/Political control via the Fake text of the Masoretic Old Testament. This is Baal-PaGHauWR sorcery, known today as Psy-ops! For the Masoretic text is a fabrication from the Talmud and the Midrash, and they know it, this is why they value and reverence the Talmud over the Scripture. Esau/Edom false-flag burned the Library of Alexandria, after taking the texts that they wanted and squirreling them
away in the Temple, so they could have the sole Religious/Political Control. Then they blamed the Roman Caesar for burning the Library of Alexandria. Then, what goes round comes round, when the Edomites angered Rome and they burnt the Temple and all their precious Documents for Religious/Political Control. So then they had faked and usurped authority which they were not entitled to, because they were Esau/Edom whom YaHuWaH does hate. So by 'Barnum and Baily Circus tactics', and the sorcery of  'you are what you say or present yourself to be (Acting)', then they have the false-front of pulling the wool over the eyes of believers in YaHuWSHuWaH MaSHiYaCH everywhere, so as to go and search out their Hebrew roots. This is a Grand Lie; for 'The LANGUAGE' was taken from them and 'Given to the Greeks' in the True Daniel 7:6 in circa 603 B.C., and the prophecy was fulfilled between 285 to 170 B.C., with the writing of the Septuagint. So follow the real logic below for the answer. This is also why there is such a war on ADaMkind-man right now.


2: YaHuWSHuWaH made Deliverance available to all ADaMkind-men of SHaM, CHaM and YaPaTH, who were ADaMkind-men after NaCH (NoaH) and long before the Hebrew and the YaSHaRAL parts.


3: The BaRiYTH (Covenant) started with NaCH, and then to his children, SHaM, CHaM and YaPaTH. Then to the SHaMites through ABRaHaM, YiTSsaCHaQ, and YaH'AQuaB. Who later became the Hebrews after YaH'AQuaB crossed over the YaBaQ river and was renamed YASHaRAL.


4: So the Covenant goes back to ABRaHaM, and his distant relatives (the-GoYiYM, and not cattle). ABRaHaM preceded YaSHaRAL, and the Hebrews.

5: So YaHuWSHuWaH has gone back to the time that precedes ABRaHaM, and has made Deliverance available to SHaM, CHaM and YaPaTH, all as ADaMkind kindred of the diminutive form of ALuHiYM; as ALuHiYMs of kindred. So we need to find our ADaMkind roots in the Original BaRiYTH overseen by YaHuWaSHuWaH, as the KaHaN GaDal,  MaLaKiT-TSaDaQ, who made Himself known to ABRaHaM because His priesthood preceded ABRaHaM, and the LauWitical priesthood.


But it Esau breeds us out of existence, or mongrelizes us to extinction, or kills us all off; then, Ha'SaTeN wins through the seed Hated by YaHuWaH, known as Esau/Edom. So both Ha'SaTeN and his minions Esau/Edom/Khazariah are all extreme liars, and vehemently hate YaHuWSHuWaH, and His diminutive kindred in the form of ALuHiYM, known as ADaMkind-man.  So they want to keep ADaMkind-man away from the True BaRiYTH at all cost.

Thanks for your donations: SHaLauWM HaYAH ATaH